Hello, whoever might stumble across this, and welcome The Walking Rants, a blogpost about whatever I get worked up about in my head when I’m walking to somewhere without wearing headphones.

So today I was looking over my reading list on my phone and was reminded of this. 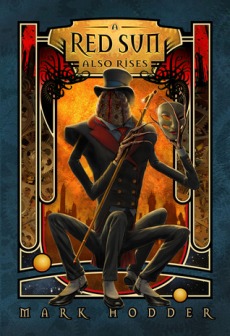 I came across this book during a book fair for 5€. It was a purchase entirely based on the cover.

Do you ever read a book that you just don’t understand?

I’m going to be honest: I did not finish it. I didn’t even get halfway. I got to page 70 of a 265 page book. I’ve read reviews that it gets good when the main character gets to the other world. If that’s the case… it really shouldn’t take about quarter of a book to get good. It really shouldn’t. At the least it should tittilate me to read further.

So here’s the plot

Aidan Fleischer, a bookish priest, finds himself transported to an alien world. With him is Miss Clarissa Stark, a crippled hunchback of exceptional ability, wronged by an aristocrat and cast out by society.

On the planet Ptallya, under two bright, yellow suns, they encounter the Yatsill, a race of enthusiastic mimics who shape their society after impressions picke up from Clarissa’s mind. Creating a faux London, the alien creatures enroll Clarissa in their council of Magicians and Aiden in the City Guard. But Why does the peaceful city require guards? After a day that, in earthly terms, has lasted for months, the answer comes, for on this planet without night, a red sun also rises and brings with it a destructive evil.

The Blood Gods! Hideous creatures, they cause Aiden to confront his own internal darkness while trying to protect his friend and his new home.

Let’s be honest, this reads like a Bloodborne plot. If it was that, I would’ve gobbled that shit right down. But to get to the cool stuff you have to wade through a marsh of scenes that made me have this expression.

Lets get to it.

This book reads like it was written in the 1970’s. I was actually convinced that it was written in the ’70s, when sensabilities weren’t as refined as they are now, if that makes sense. You know like when you read Lord of the Rings and there’s a lot of ‘queer’ and a use of “f*ggot” (the wood not the slur, but… y’know. Sensibilities), but you don’t think too much of it because those words had different meanings in ye olde times?

This book was written in 2012. It feels like there was an attempt to immitate classic literature, and it works to a point. But when you realize it’s written not even a decade ago, it reads as off. However, the plot takes place in the late 19th century, if I remember correctly. So I give it a pass and read on.

A preacher gets tricked by a girl into having feelings. It is specifically portrayed as this. The preacher falls for a girl from town, and gives her attention, which she accepts in an obviously fake way. He goes out of his way to talk to her and she giggles yada yada yada. One time when he’s talking to her, the girl’s family ask if he’s bothering her and she says yes, he’s basically been stalking her blah blah blah. The girl’s family says the preaches has got to pay them hush money at weekly intervals, or else! So he leaves town.

Wait no. The order in which I wrote this made it seem like he wanted to leave town because he was being extorted. Don’t be fooled. When he reflects about this moment, the reason he left town is only 10% about fearing for his life. The other 90% is that he just feels that embarrassed about getting rejected.

Not only that. It is heavily implied that this instant makes him hate women and that he becomes Jack the Ripper. It was really an embarrassing moment, you guys.

Now, let’s try to omit that this is incredibly mysogynistic (I did for… some reason. Fair chances, I gues?? I don’t know), this is the guy I’m supposed to be rooting for?

I’m not saying a main character has to be perfect morally or even mentally. One of my favorite books ‘The Left Hand of God”, features a main character that’s basically a sociopath through abuse, but he’s also portrayed as this and received as this by the rest of the characters in the book. There’s no doubt that this guy is actually and factually awful.

This guy… honestly just needs to get his shit together.

Now, talking about fair chances, I’m a big supporter of the concept. If this was the only gripe I had with this book, I would consider it unfortunate and move on. I know how character arcs work. If I hazard a guess, he’ll grow more confident with himself and travelling (And if it’s not, well that’s unfortunate). So I keep reading. He starts to have holes in his memory and it’s heavily implied the one rejection he got impressed him so much he becomes Jack the Ripper, I frown. I keep reading.

He and his friend travel to New Guinea, where they encounter a tribe. It’s really racist. The word savage is thrown around a lot, especially in regards to their appearance. They’re cannibals, they’re naked. You know the whole spiel. I grit my teeth.

They get transported to the alien world alright. By being a living sacrifice to the tribe. I sigh. I close the book. I throw it against a wall. I didn’t even get to the cool creatures yet.

Have there been worse things to read? Probably. But this book feels out of date and out of touch. Nothing makes sense. I’m still stuck on the first plotpoint, how do you expect me to somehow process an entire alien planet and apparently a London simulation? But then I got it. I too have been betrayed. That beautiful and promising cover art was just a front for a straight, white man story. And I too felt embarrassed.